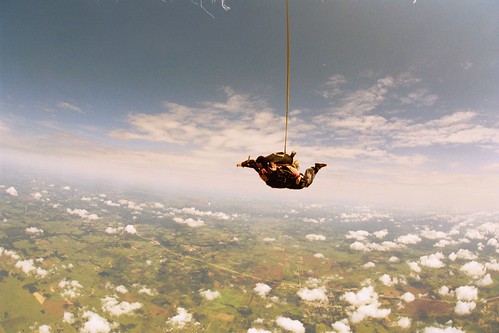 Some of our residents are more adventerous than other.  Thankfully no one is dead or so wounded that they wished they were dead.  Delaware.newszap, “Two skydivers were Sunday afternoon in an accident at the Laurel Airport, Delaware State Police report. The accident occurred at 1:30 p.m. as a 69-year-old Laurel man and a 52-year-old Beltsville, MD man were skydiving together over the airport, state police spokesman Cpl. John Day said. As they descended their parachutes became entangled, which prevented one parachute from fully deploying, causing the parachutists to improperly land together.

The 69-year-old male was transported by Delaware State Police helicopter to Christiana Hospital with non-life-threatening injuries. The 52-year-old was transported to Peninsula Regional Medical Center, treated for minor injuries and released.

On June 6th, Berman Enterprises purchased Bowie Market Place shopping center,  located at 3206 Superior Lane in Bowie.  Berman Enterprises is headquartered in Rockville, MD and Palm Beach Gardens, FL.  The immediate plans for the mall are to demolish it, but I’ll be following up with them to see if they have a real inkling of what they’d like to see there.  Berman is the developer of Glenwood Hills in Capitol Heights, the 133 acre transit oriented mixed use development and Downtown at the Gardens in Palm Beach County, FL (decent spot, I visit there yearly).  Bowie Market Place was the hot mall in the 1960s but today, less than 1/3 of the mall is leased and the outside looks just awful.  Demolition of Bowie Market Place was supposed to begin in 2011 when it was owned by JBG Rosenfeld.

The official press release reads as thus: The Prince George’s County Department of Environmental Resources (DER), introduced legislation establishing a schedule of fees to be collected as part of the County’s Watershed Protection and Restoration Program (WPRP). The funding is expected to generate approximately $1.2 billion over the next 13 years and will provide a strong impact on the County’s economic development by creating 5,000 new jobs, revitalizing neighborhoods and providing for the investment and launching of local green businesses.

Required by a Federal mandate under the Clean Water Act, the WPRP directs Maryland’s nine largest counties and the City of Baltimore to form a funding plan to address stormwater runoff pollution from impervious areas such as parking lots, roads and roofs before it enters local waterways. To comply with the law, the County will have to treat 8,000 acres of impervious surfaces and must be completed with the program by 2025.

The proposed fees are:

The total annual fee rate and impact fee for each impervious acre for industrial, commercial or instructional properties is $372 per impervious acre; plus an administrative fee of $20.58

What PGC Blog is saying is I’M SICK OF FEES AND HIGH TAXES IN MARYLAND but right now, we have no other way to deal with the FACT that 92% of our waterways (i.e. creeks, streams, rivers) are so contaminated that they’re dern near and mostly unusable. This is why the residents and officials have to work HARD at making this county a easy place to do business for big businesses and employers, small businesses, start-ups, entrepreneurs, fashionistas, pet groomers, and everybody that can drop a dime into our revenue pot.  We CANNOT continue relying on property taxes to fund the county.

From The Gazette, “The fees will help pay for a system that is expected to create about 50,000 water filtration structures across the county and involve as many as 5,000 workers in the construction process, said Larry Coffman, DER’s deputy director. “We have a serious problem with flooding and wet basements, not only in Mount Rainier but across the area,” said Brent Bolin, a Mount Rainier councilman (Ward 2).“It’s an investment in our quality of life. If we build green infrastructure across the county, the county will both look better and work better.”

I’m sooo late to this news.  Xscape Movie Theatre opened in like MAY.  Located at Brandywine Crossing, which I haven’t been to yet, 7710 Matapeake Business Drive, the theater state-of-the-art, 14-screen theater features stadium seating, FREE REFILLS, and rewards program, gift cards and acommodates birthday parties and gatherings.